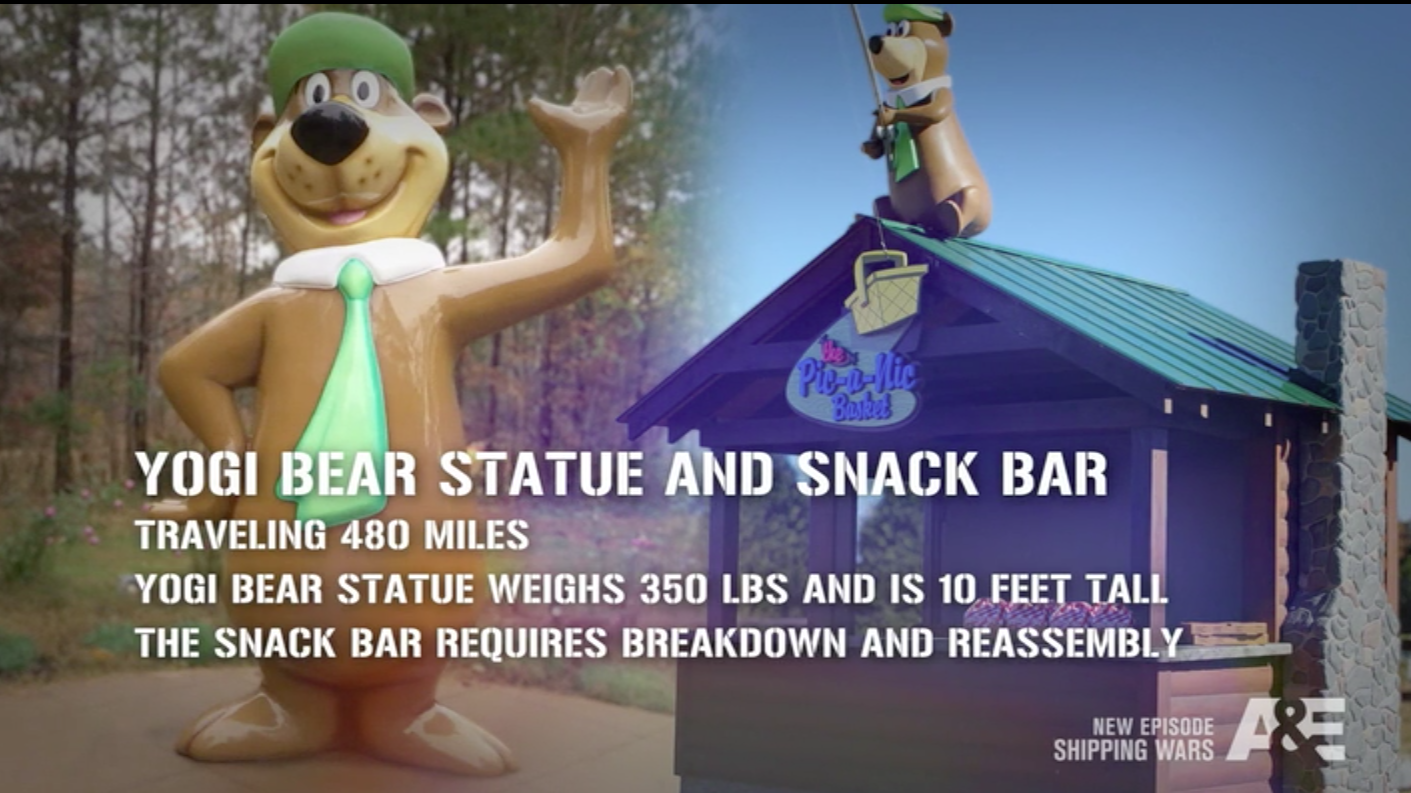 By Lisa Courtney, Director of Franchise Sales and Support

Yogi Bear™ may be in hibernation, but his namesake Jellystone Park is getting plenty of off-season attention, which is great for our brand’s visibility.

A&E’s “Shipping Wars” prime time reality show recently took viewers on the road as a 10-foot Yogi Bear™ statue and a massive Yogi Bear-themed concession stand were transported from Cincinnati to Jellystone Park locations in Asheboro, North Carolina and Tabor City, North Carolina. There was plenty of drama along the way, but both items arrived safely and on time. Yogi Bear, Boo Boo™ and Cindy Bear™ were on hand to celebrate the successful deliveries.

Viewers unfamiliar with Jellystone Park were given a glimpse of the magic and fun that set it apart from typical campgrounds and RV parks. The episode began inside the shop at Kingdom Productions, which designed the concession stand. It ended with a reveal party at the Tabor City Jellystone Park. Yogi Bear arrived at the celebration on the park’s fire truck,] and families enjoyed pizza and s’mores while the characters posed for photos. Owners of the two parks, as well as members of their staffs, were featured on the episode.

Watch the episode On Demand, on the A&E app or at AETV.com.

The timing of this visibility couldn’t have been better, with families already planning their summer vacations. As with the last several years, we expect to see significant growth in bookings. Being featured in a prime time cable TV show introduces Jellystone Park to new guests. It also reminds past customers of the fun their families enjoyed.

Your email is safe with us.

I really like the way it brings me a nice class of customers. I get happy families. I get people who want to come and to spend money to have fun. They enjoy our park. It’s just wonderful they way they come in, and you get so many that want to meet the other guests, they want to go have fun on the Jumping Pillow, then they want to go to the Splash Pad – and they want … END_OF_DOCUMENT_TOKEN_TO_BE_REPLACED

We got into the Jellystone Park brand at the beginning of last year. This is the end of our first season. We are pretty excited about it. What I like most about the brand is the fact that they are drawing in families from three hours away. They all know what we’re there for, and they’re willing to spend a longer time at our park than just the weekend. The inv… END_OF_DOCUMENT_TOKEN_TO_BE_REPLACED

We’re going to be entering our 13th season, and I sure would hate to own a property without being Yogi branded. The reason we really like Jellystone Parks is because of the support behind us. With 80 other parks in the system, we have 80 sources of question-and-answer type people to go to. The support is wonderful. The franchise, the CJS system itself – their … END_OF_DOCUMENT_TOKEN_TO_BE_REPLACED

We’ve been in the Jellystone Park franchise system for 20 years this year. It was a family endeavor to begin with, but over those 20 years we’ve seen significant growth of our campground. In particular, just the last three years in a row we’ve been up double digits, 10-11% points three years in a row. We’ve really been coming on strong, and continue to see good… END_OF_DOCUMENT_TOKEN_TO_BE_REPLACED

The advantage of a Jellystone Park™ is that it is so much more alive than the average park. Plu… END_OF_DOCUMENT_TOKEN_TO_BE_REPLACED

In 2003, we joined Jellystone Park™. The operations… END_OF_DOCUMENT_TOKEN_TO_BE_REPLACED