Founded in 1969, the Jellystone Park™ system has grown to include more than 75 locations in the US and Canada, making it the second largest campground franchise in the country. Although the Jellystone Park franchise is now a thriving business and continues to open new locations, it had humble beginnings in a small Wisconsin town. 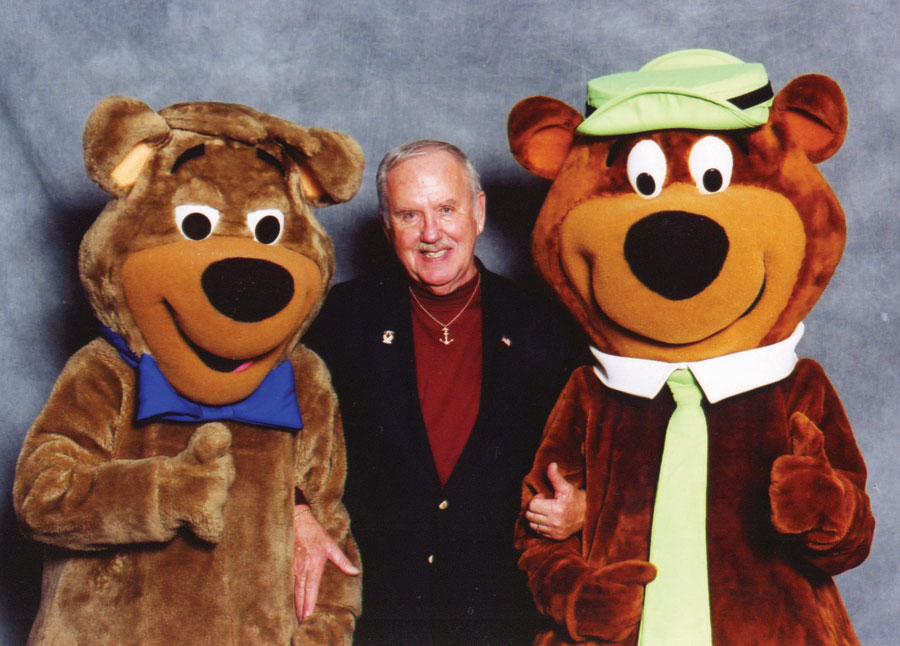 Like many business ventures, Yogi Bear’s Jellystone Parks began with one man, an idea and enough gumption to take a risk. Doug Haag, of Manitowoc, Wisconsin, was already a successful advertising executive in the summer of 1968 when a drive down the local highway changed his future.

As he whizzed past numerous cars packed with families and pulling pop-ups and trailers, the concept struck him. All these campers needed a place to stay and might want something better than a campground along a busy highway. What if there was a “destination” campground, where families could spend their vacations swimming, playing, and enjoying nature?

What’s in a Name?
Haag decided to make the idea a reality and partnered with a friend and local contractor. Together they purchased 30 wooded acres in Sturgeon Bay, Wisconsin for about $3000 ($100 per acre)! The next step was to decide on a name. From his advertising experience Haag knew, “In order to draw campers, we needed a clever and recognized name for our campground. My partner and I and our families had many discussions about names. Paul Bunyan, Lewis & Clark, Hiawatha, Pocahontas, Robin Hood, sports stars, and historical figures. We went through them all, but nothing seemed to fit.”

Then on a cold Saturday morning in January of 1969, Haag’s three young kids were watching cartoons in another room and he heard these words coming from the TV, “OK Boo Boo, let’s get our pic-a-nic baskets ready, the campers are coming!” A beloved cartoon character, Yogi Bear, living in a campground called Jellystone Park… what a great fit for a family vacation spot!

Considering Yogi Bear was a famous and well-protected copyright, Haag had more work to do. He made an appointment with the Vice President of Screen Gems, then licensor of the Yogi Bear and Jellystone Park names. He traveled to their New York City office and presented his campground concept with a few hand-drawn sketches and a lot of enthusiasm. With some persuasion, Screen Gems saw the value of Yogi Bear’s Jellystone Park and approved the license.

The rest of the winter was spent making signs, building a Yogi statue (out of chicken wire and plaster), and creating park literature. Haag met with the president of Hardees, a fast food chain, and purchased left-over Yogi Bear merchandise that was used for a chicken promotion.

Construction on the park began in April 1969, and only three months later the pilot Jellystone Park in Sturgeon Bay opened to much fanfare. “There was no way we could have imagined the chaos that was to happen that opening weekend. Three times as many people as we had sites for came to camp! We allowed them to set up in the field nearby, in the playground, etc. – anywhere they could find room!” It was $3.50 to camp and included all the amenities – swimming pool (Yogi’s Old Swimming Hole), fishing pond and playground. Two more parks opened in 1969 and 1970, one in Orlando and one in California. Others followed quickly, in Orlando, Wisconsin Dells, Apple Valley (near Los Angeles), Apopka, Florida and Glenbeula, Wisconsin. The demand kept increasing and even Hollywood wanted to get involved.

“Because of the powerful Yogi Bear name, I met with movie stars and their agents about them owning one or more franchises. Business lunches with John Wayne, Andy Williams, Jack Lemon, The Smothers Brothers, Don Wilson, and many more!” said Haag.

In 2003, we joined Jellystone Park™. The operations… END_OF_DOCUMENT_TOKEN_TO_BE_REPLACED

We’re going to be entering our 13th season, and I sure would hate to own a property without being Yogi branded. The reason we really like Jellystone Parks is because of the support behind us. With 80 other parks in the system, we have 80 sources of question-and-answer type people to go to. The support is wonderful. The franchise, the CJS system itself – their … END_OF_DOCUMENT_TOKEN_TO_BE_REPLACED

The advantage of a Jellystone Park™ is that it is so much more alive than the average park. Plu… END_OF_DOCUMENT_TOKEN_TO_BE_REPLACED

I really like the way it brings me a nice class of customers. I get happy families. I get people who want to come and to spend money to have fun. They enjoy our park. It’s just wonderful they way they come in, and you get so many that want to meet the other guests, they want to go have fun on the Jumping Pillow, then they want to go to the Splash Pad – and they want … END_OF_DOCUMENT_TOKEN_TO_BE_REPLACED

2011 was our first year as a Jellystone Park™. Since then, we have definitely noticed that we are attracting a lot more guests from a much larger radius that extends nationwide. And we are seeing more guests from Canada. Over this three year time period, our store sales have increased almost 45%! The increased business also helped to allow us to do… END_OF_DOCUMENT_TOKEN_TO_BE_REPLACED

We got into the Jellystone Park brand at the beginning of last year. This is the end of our first season. We are pretty excited about it. What I like most about the brand is the fact that they are drawing in families from three hours away. They all know what we’re there for, and they’re willing to spend a longer time at our park than just the weekend. The inv… END_OF_DOCUMENT_TOKEN_TO_BE_REPLACED